Andrew Luke (b. 6 December 1973) is a comics creator, journalist, and blogger born in Belfast. He has commonly been associated with advocating creator's rights and until recenty, the self-publishing model. His works are often autobiographical and contain elements of surrealism, politics and edutainment, the synthesis of education and entertainment. He has been publishing comics regularly since 1997. 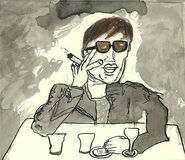 The Implausibility of Reason (2001)

From a debate in Comics International between Bugpowder's Pete Ashton and creator Paul Rainey regarding the commercialisation opportunities of comics in newsagents, Andrew created Brookside: The Comic, a "bootleg" of the Channel 4 soap. Inspired by seeing Patrick Brown 's A Virtual Circle , a local underground comic which went beyond it's first issue, and encouraged by cult creator Ralph Kidson's review that "Luke draws like a serial killer in his death row cell" , he resolved to create a monthly comic. Bob's, a bed-sit-com set in Bangor, County Down, was launched the following month. Set in a flat with the element of a drop-in centre, it was frequented by a regular cast of likeable "dole-hacks, drug users and alcoholics", as well as a succession of characters from TV and popular culture. The monthly schedule was maintained for the first three issues and a 52-page annual, which was planned to be released alongside Issue 4, which did not materialise until 2002. The series also featured "Bob's Dogs" by Stuart Luke , and work by guest artists, including Patrick Brown, Emmett Taylor , P. J. Holden , Dave Morris , Ralph Kidson, John Kirkham and Dek Baker. It lasted for six issues, as well as three spin-off issues and ended in 2004.

The final issue of Bob's doubled as Issue 3 of Andrew Luke's Comic Book, a series developed from 1999 to allow context for different material. In 2000-2001 he co-created four issues of The Implausibility of Reason with Richard Barr , Stuart Luke, Malcy Duff and John Robbins .

As his interest in the cartooning of illustration waned, Luke's interest in the power of writing and the UK's active underground comics scene grew. Peer Peter Ashton had been publishing TRS - The Review Sheet, a single sided sheet of A4 doubled over containing concise reviews of UK underground comics and zines, as well as details of their format, page count, cost and ordering information. Luke imitated this with TRS2, running 50 word reviews for 15-20 comics per issue. The first issue was published in December 1999.

The news-sheet had a print run of 300 copies, further increased by reprints in Shane Chebsey's Comics Artists of The Future anthology. It was also run under the Creative Commons-esque Shareware Comics , pioneered by PJ Holden, permitting anyone to reprint and distribute the work. John Robbins designed the Bristol Comics 2000 Festival edition with short strips and new graphics running alongside reviews. Robbins contributed reviews from thereon, as did Richard Barr. The Coward Brothers, Leeds' creators of Hardly The Hog, contributed a story to the 2001 edition. The print edition folded in August 2001 after fourteen editions. It was archived on Ashton's Bugpowder.com, and continues to run new reviews by Robbins, Luke and other contributors irregularly.

While running TRS2, Luke was asked to contribute a one-page column to Joel Meadows' Tripwire magazine, and reviews to Silver Bullet website and Phil Hall's e-magazine, Borderline. He was also asked to contribute to Bugpowder.com which he did regularly until 2009, the site getting approximately 400 hits a week.

In 2005, Luke relocated to Oxford were he sat as Committee Secretary for Caption, the UK's longest running comics festival, until 2008. In his final year he organised and curated the Caption Comics Collective exhibition at the Oxford Jam Factory, featuring his own work along with Daniel Merlin Goodbrey. Matt Brooker (D'Israeli), Jeremy Dennis née Day, Deirdre Ruane, David Baillie, Ellen Lindner, Jess Bradley and Sally Anne-Hickman.

In late 2007, Andrew published Gran, a 24 hour comic dealing with the death of his grandmother. In trying to sell this he corresponded with Oli Smith, and become involved in the early stages of Smith's London Underground Comics (LUC), a creator-friendly stall in Camden Lock Market, which echoed Paul Gravett and Eddie Campbell's Fast Fiction. Set up as a reaction to exorbitant fees asked of self-publishers at conventions, LUC promoted an more accessible point of sale. This was coupled with attention to high profile promotion. Luke appeared in their second viral video which featured Alan Moore and has been named as a catalyst for their first event, The London Underground Comics Thing, boycott of the UK Web and Mini Comix Thing, which despite being friendly in tone attracted the ire of some such as Cliodhna Lyons. Luke engineered the Seven Comics In Seven Weeks promotion for LUC, creating new material and some he had kept in storage. Sub-headed "Bringing Weekly Comics Back to the UK", the comics featured were a reformatted edition of Gran, Sociology Comix, Optimus and Me , Andrew Luke's One Pagers Comic Book, The Party, Sheridan Cottage, and Mini-Bots.

Alongside this he was asked to write a weekly column for Comics Village, which became Sheridan Cottage and ran in 2008.

The work is divided into two parts. The first is thematic of the politics of LUC which interested Luke, and charts the groups rise from his perspective, and talks about engineering festivals and the boycott. The second part includes interviews with other comics festivals organisers in the UK about their experiences, and chronicles his own experience with The Jam Factory, and Felt Tip Market, a one-day trial at Oxford Market using the LUC model.

On May 24th, he set out to review 24 mini-comics in 24 consecutive hours through a mixture of written, photo and video recordings. The pieces ran across Livejournal, YouTube, Comics Village and TRS2. He achieved this in 28 hours, however some pieces were lost when Comics Village was hacked and wiped.

Upon returning to Belfast, an application to Alltern8.com led to a first weekly then thrice weekly column, Comicking. Although looser in style than it's predecessor it contained similarly resourceful works including a four-part series on UK and Irish Comics Pub Meets, interviews with Ralph Kidson and Leonard Rifas, a proposal for an alternative to the Eagle Awards and a look at how comics creators covered the 2010 UK election. There were also a series of pieces about The Black Panel, the market stall initiative set up by Patrick Brown and himself.

The following year, he contributed to IrishComicNews.com during it's first few months, contributing intermittently thereafter..

Absence and Rise to Prominence[]

During 2010, he co-created Hold The Phones, It's Alex Jones! with Richard Barr. The project grew over three years to an expanded edition, with the 2010 material previewed as a free work in 2012, which the author estimated at over 10,000 reads.

In February, he created Absence, another 24 hour comic, this time about his experiences of living with epilepsy. The following year this was re-worked and drawn by Stephen Downey using money from the UnLtd Millenium Awards. With 10,000 print copies allocated to small mailings in the province, it is one of the most read comics created in Northern Ireland. In November 2010, Don't Get Lost became his third 24 hour comic, created out of his survivor experiences.

Also that year, he wrote and presented the documentary The Invisible Artist on the history of contemporary comic book culture in Belfast for local television station, Northern Visions. Andy was the driving force behind the Belfast Comics Barcamp, a partly-structured partly-improvised unconference event generated by participants. Speakers included Paddy Brown, Gareth Watson and Ciara Brennan, with Luke talking on Writer Pitching and Digital Distribution. The event was one of the world's first barcamps devoted solely to comics. Although a qualitative success, the experience left Andrew disillusioned.

From 3 February to 15 March 2012 his three twenty-four hour comics were exhibited at his first solo exhibition, "In Time", at the Arts and Disability Forum in Belfast. For the residency part, he created NewsZoom , a twice-weekly comic inspired by stories in the news. He also released the print of Don't Get Lost, a workshop comic Beneath The Tide, audio versions of Gran and Absence, and a collection of the Alex Jones stories during this time. Research work on political corruption in history led to a strip on Horatio Bottomley, drawn by Ruairi Coleman, appearing in To End All Wars in 2014. It was given a noteable mention by Pat Mills in his introduction. The anthology was nominated for Best Graphic Novel and Best Realist Work in The Eisner Awards.

New work appeared for subscribers-only on Patreon, initially with a 2017 collection. We Shall Not Be Stapled, is an anthology of lesser-seen and new collaborations with stories written by John Robbins, Ben Stone, Mark McCann, Richard Barr, Laura Reich and Dan Lester, and art by Dek Baker. Andy also produced two new 24 hour comics, Occupied: Mixed Up Media, and Occupied: The Spook, and a satire of grim comics, The Underdog.