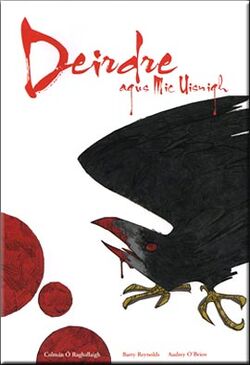 Audrey O'Brien is a production manager for feature and tv animation and a colourist for graphic novels. She studied classical animation at Ballyfermot College, Dublin. In 2006 she worked as the production co-ordinator on the Oscar and Annie award nominated Irish feature film The Secret of Kells, the first feature film to be produced by the Cartoon Saloon animation studio. She is the colourist and letterist of the Cló Mhaigh Eo Irish-language graphic novel Deirdre agus Mic Uisnigh (2008) working with the illustrator Barry Reynolds.

This article about a comics creator is a stub. You can help the Irish Comics Wiki by expanding it.

Retrieved from "https://irishcomics.fandom.com/wiki/Audrey_O%27Brien?oldid=23845"
Community content is available under CC-BY-SA unless otherwise noted.