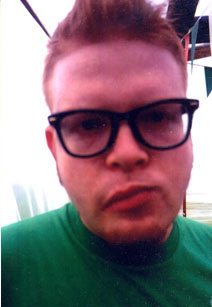 Brendan Byrne, aka BrenB, is an illustrator, graphic designer, typographer and cartoonist.

He edited the small press comics anthology Toenail Clippings (1998-2002), and contributed to issue 2 of the anthology series This Way Up in July 2005. He is the designer for Dublin Comics, for whom he coloured Gerry Hunt's Streets of Dublin (2005). He also coloured Hunt's historical graphic novel Blood Upon the Rose (2009).

His cartooning appears in The Dubliner and The Phoenix. He wrote the political strip "Enforcing Justice", drawn by Des McElroy, for the latter, and also wrote political strips for McElroy in the Irish Daily Star.

He is a member of The Illustrators Guild of Ireland and Candycollective, and a founder member of the design collective Tiny Little Horse.

Retrieved from "https://irishcomics.fandom.com/wiki/BrenB?oldid=24739"
Community content is available under CC-BY-SA unless otherwise noted.