Bryan Coyle, aka Brigonos Mac Giolla Chomhgaill and Mongoose McCloud, is a writer-artist from Cookstown, County Tyrone. Alongside writer Edward Berridge, he is one half of Death Camp Jones Productions, publisher of Berridge and Coyle's Pony School (2005), a parody of British girls' comics, and the anthology Action Stations! (2006), parodying British boys' comics. He is the creator of the younger-readers superheroine comic Turbo Katie (2007-).

In 2005-2006 he drew a Doctor Who spin-off webcomic, The Forge: Project Longinus, written by Cavan Scott and Mark Wright, which chronicled the adventures of a covert team based in Wales who were led by an immortal and amoral man in their pursuit of alien artifacts - the strip was discontinued shortly before production began on the TV series Torchwood and can no longer be found online. He created the strip "Binmen of the Apocalypse" for the apocalyptic fanzine The End is Nigh (2005-). His work also appears in anthologies from FutureQuake Press, Omnivistascope and Accent UK. He drew a story in Sancho #4 in 2008, and a Judge Joyce story in Hibernia Comics' Irish-themed 2000AD fan comic Tales from the Emerald Isle in 2010.

His graphic novel Babble, written by Lee Robson, was published by Com.X in 2013, and led to Coyle being nominated for the 2013 Russ Manning Award. After Babble, he contributed again to Omnivistascope, Dirk Van Dom's anthology Vanguard, and an online Judge Dredd story presented by Zarjaz. 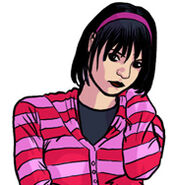