David Norman (b. Dublin, 19 December 1954) is an illustrator, storyboard/animatic artist and painter, and more recently a comics artist in German comics.

Educated at the National College of Art and Design and the College of Commerce in Dublin, he worked as an illustrator in advertising and emigrated to Germany in search of a wider audience in 1977, initially working as a graphic designer in Regensburg. In 1983 he went freelance. He has worked in film, drawing storyboards and creating animatics, and worked as an advertising illustrator for agencies in Ireland, Britain and Germany.

He describes comics as his "first love". In 2009 his first comics work, the album Luna, Hektor und der Professor: Der Schatz von Aschkor ("Luna, Hektor and the Professor: the Treasure of Aschkor"), an archaeological adventure drawn in a semi-realistic, semi-cartoony Franco-Belgian style, was published by Epsilon Verlag in Germany.

He lives in Meerbusch near Düsseldorf in Germany. 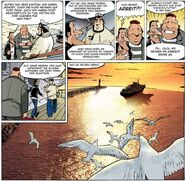 Retrieved from "https://irishcomics.fandom.com/wiki/David_Norman?oldid=24535"
Community content is available under CC-BY-SA unless otherwise noted.