Deirdre de Barra is an artist from Maynooth, County Kildare, who is associated with Longstone Comics. She is the creator of the self-published comic Found (2008). She created "Chicky Rampage" for the first Longstone Comics anthology (2008), drew "Survival", written by Matthew de Barra, and coloured "Good Gunge", drawn by Gavin Marks. She also coloured "The Precipice", written and drawn by Jason Groarke, for the second (2009), and drew a section of the collaborative story in the third, "The Came From Outer Space" (2009). She drew Downpour, written by Peter C. Loftus (2009), and is working on a science fiction series with the same writer. In 2010 she drew the colour science fiction minicomic Some Blue Bloke, written by Gar Shanley, and in 2011 created Clueless in the same format. In 2012 she published American Independent Feature Film, based on a blog post by Shanley. 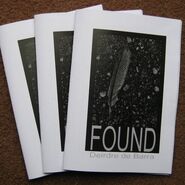 Retrieved from "https://irishcomics.fandom.com/wiki/Deirdre_de_Barra?oldid=27361"
Community content is available under CC-BY-SA unless otherwise noted.