Irish Comics Wiki
Register
Don't have an account?
Sign In
Advertisement
in: Creators H, County Clare creators, Creators based in Britain,
and 4 more

Edward Sylvester Hynes (b. 1897, Burren, County Clare; d. Burren, 12 May 1982) was a joke and political cartoonist, caricaturist, illustrator and painter.

The son of a surgeon, he was brought up in Nottingham, served in the Merchant Navy, and studied medicine at Sheffield University. Some of his earliest caricatures appeared in Town Topics in 1923, but he is probably best known for his colour caricature covers for Men Only from 1937 to 1956. He also contributed to the Daily Sketch, Lilliput, Gentlewoman, The Evening News, The Strand Magazine, the Humorist, Razzle (including covers), the Sunday Express, the Bystander, London Calling, Night & Day and London Opinion. He drew theatre caricatures for the Illustrated Sporting and Dramatic News, and also worked in advertising. He was a fellow of the Royal Geographical Society.

He published one book of cartoons, Cocktail Cavalcade (1937). He retired to his birthplace in Burren, County Clare, where he produced oil paintings and charcoal drawings. He died at Bayfield House, Newquay, Burren, and is buried in Corcomroe Abbey. 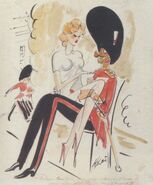 "Dear mother, as you've advised me, I am constantly on my guard" 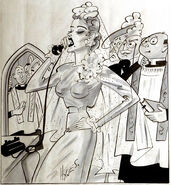 "Oh would you be good enough to ask Capt. Bagshot if he remembers what day it is!"

Caricature of Alan Whicker, cover of Men Only, October 1952