Henry Brocas (b. Dublin c.1762, d. Dublin, 2 November 1837), engraver, landscape painter and caricaturist, was the great great grandson of Robert Brocas of Derbyshire who had come to Ireland as a cornet of horse under Oliver Cromwell. His father was Robert Brocas; his mother was Bridget, daughter of Nicholas Taylor of Wexford. His mother's relatives included Christopher Taylor, who had been obliged to print documents for the United Irishmen after Wexford was captured by them during the 1798 rebellion, and George Taylor of Ballywalter, who narrowly avoided execution as a loyalist in the same rebellion.

Brocas is said to have been self-taught as an artist. His primary interests were in engraving and landscape painting, mostly in watercolour. As an engraver he was noted for his portraits and caricatures of Dublin figures of the late 18th century, many of which were published in the Hibernian Magazine. He also worked as a cartoonist and/or engraver for Exshaw's Magazine, a repackaging of material from English magazines with some original material of Irish interest. Illustrations in this period could only be printed from woodblocks or copper engravings, and unless publisher John Exshaw had access to the original blocks or plates, reprinting cartoons would mean re-engraving them. Brocas is credited with a print of the great English cartoonist Thomas Rowlandson's "The Loves of the Fox and the Badger" in Exshaw's Magazine in 1784.

In 1800 Brocas was appointed master of the Landscape and Ornament School of the Royal Dublin Society. After the arrest of United Irishman Robert Emmett on 25 August 1803, Dublin Castle commissioned Brocas to produce an engraving of the prisoner before his execution on 20 September, which was later used to illustrate an edition of Emmett's defiant speech from the dock.

Brocas contributed cartoons depicting British atrocities in the wake of the 1798 rebellion to the Irish Magazine and Monthly Asylum for Neglected Biography, an anti-government publication published between 1807 and 1815 by Walter Cox, a member of the United Irishmen.[1] 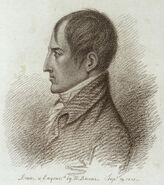 "Hepenstall the walking gallows", 1810
Add a photo to this gallery

Retrieved from "https://irishcomics.fandom.com/wiki/Henry_Brocas_(1762-1837)?oldid=27145"
Community content is available under CC-BY-SA unless otherwise noted.