Holy Cross is a three-issue series written by Malachy Coney and published by Fantagraphics Books in 1993-95. Each issue was a stand-alone story set in the eponymous district of north Belfast, each drawn by a different artist and linked by supporting characters Jimmy and Davy, a local gay couple.

In the first issue, drawn by Davy Francis, the district is shaken by the rape and murder of a local woman. The second, drawn by Chris Hogg, is a magical realist story of a young man who has saved all the tears he's shed in a bottle and hopes that by throwing it away he will lose his sadness. The third, drawn by Paul J. Holden, is the story of a young boy who escapes an abusive home life by acting out the fantasies in superhero comics.

The series was followed by a Holy Cross graphic novel, The Moon Looked Down and Laughed, by Coney and Holden, in 1997.

According to Davy Francis, a fourth issue exists, drawn by himself and never published. The characters Jimmy and Davy were also to appear in a spin-off strip illustrated by Seán Doran, which remains incomplete. 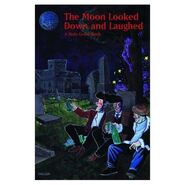