According to Genealogical records, Thompson should be spelt THOMSON.

Hugh Thomson, illustrator, watercolourist and cartoonist, was born in Coleraine, County Londonderry, on 1 June 1860. A keen artist as a child, at 16 he produced an illuminated address for the retiring headmaster of Coleraine Model School, which got him a job at Marcus Ward and Co, a Belfast firm of art printers, where he received training from John Vinycomb, a member of the Royal Irish Academy.

He moved to London in 1883, where he was employed by William Comyns Carr on the English Illustrated Magazine, illustrating stories by W. Outram Tristram, collected as Coaching Days and Coaching Ways in 1888. In the Spectator he created the character of Sir Roger de Coverley, an amiably ridiculous English squire in the reign of Queen Anne, who got his own book, Days with Sir Roger de Coverley, in 1886.

He illustrated numerous books, including Mrs Gaskell's Cranford series, Jane Austen's Pride and Prejudice (1894), Emma (1896), Sense and Sensibility (1896), Mansfield Park (1897), Northanger Abbey and Persuasion (1898), and works by Shakespeare, Sheridan, Goldsmith, Hawthorne and J. M. Barrie. He designed distinctive ornamental covers for the books he illustrated, and painted colour plates for many of them, usually in ink and watercolour. He had a joint exhibition with Kate Greenaway at the Fine Art Society in 1891. 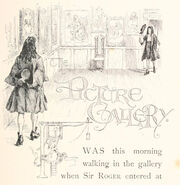 Thompson's cover for Pride and Prejudice, 1894