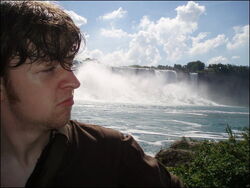 Michael Arbuthnot (b. 15 December 1986) is a cartoonist based in Ballymena, County Antrim, and the creator of the parody superhero team webcomic The Amazing Squad, which ran on ComicGenesis from 2004 to 2005. Initially a gag strip based on stock sprites, it developed into a more story-oriented hand-drawn series. The strip ended in 2005, while Michael was studying for his A-Levels. He is now training to be an architect, but hopes to return to cartooning in the future.

Retrieved from "https://irishcomics.fandom.com/wiki/Michael_Arbuthnot?oldid=24728"
Community content is available under CC-BY-SA unless otherwise noted.