Mike Hubbard, illustrator and comics artist, was born Ernest Alfred Hubbard in Dublin on 2 April 1902. His family moved to London after the First World War, where he attended art school before joining Dean's Studios as an illustrator. By the 1930s he was working on the Amalgamated Press's story papers The Thriller and Detective Weekly, drawing black and white interior illustrations and two-colour covers, adding superior draughtsmanship and figure work to the atmospheric, shadowy style established by Arthur Jones. He also worked for papers such as Modern Wonder and The Passing Show.

After the Second World War, story papers gave way to comics, and Hubbard drew adventure strips for AP's Knockout, starting with Treasure Island, based on the 1934 film version, in 1945, and followed by an adaptation of R. M. Ballantyne's The Coral Island in 1946. The same year he became assistant to Norman Pett on the Daily Mirror's daily cheesecake strip Jane, drawing backgrounds and supporting characters. He took over from Pett as the strip's artist in 1948, and drew it until it finished in 1959.

He continued to draw adventure strips in Knockout, including The Adventures of Robin Hood, a 14-part adaptation of the 1938 Errol Flynn film, including a scene cut from the screenplay, and Sinbad the Sailor, based on the Douglas Fairbanks Jnr. film, both in 1947. "The Adventures of Marco Polo" in 1948 was the first strip for which he received a byline, and was followed in 1949 by a five-part adaptation of the John Wayne western Red River. His last work for Knockout was a one-off science fiction/superhero story, "Captain Conquest and the Men from Mars", in the Knockout Fun Book for 1952.

He worked full-time on Jane during the rest of the 1950s, but in the early 60s he began working for Fleetway (as AP was now known) on their girls' titles, beginning with Valentine in 1961, drawing strips based on pop songs, then Princess, where he drew the romantic entanglements of "Nurse Angela", and Schoolgirl's Picture Library, where he drew strips like "Annette in Wartime France", the Dickensian "Angel of the Backstreets", and "The Peewit Gang". He also drew for Poppet and June, but perhaps his best-remembered strip from the girl's weeklies was "Jane Bond, Secret Agent", in Tina and Princess Tina, in 1967-70.

In 1965 Leonard Matthews, his former editor from Knockout, recruited him for The Ranger, a high-quality boys' weekly in the mould of the Eagle, to produce a serial adaptation of H. Rider Haggard's King Solomon's Mines in full colour, which was reprinted by Bear Alley Books in 2013. After he finished that he moved on to a new full-colour version of The Coral Island for Look and Learn, and then back to The Ranger to adapt Haggard's Allan Quatermain, which although produced in colour, was printed in black and white. In the early 1970s he produced full colour classic serials for the girls' paper Pixie, including Frances Hodgson Burnett's The Secret Garden and A Little Princess. He began an adaptation of Richard Doddridge Blackmore's Lorna Doone, but Pixie folded in 1973 and the serial was never completed.

His last published work, also commissioned by Leonard Matthews, consisted of new illustrations for reprinted stories in The Bumper Story Book for Boys and The Bumper Book for Girls in 1974-5. He was an excellent draughtsman and excelled at the figure, particularly the female figure, and his colour work was both vivid and sensitive. He also excelled as a portrait painter, and was an expert in the history of architecture. He died on 25 June 1976. 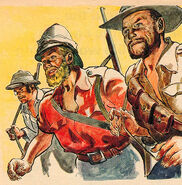