Irish Comics Wiki
Register
Don't have an account?
Sign In
Advertisement
in: Creators B, Comics writer-artists, Belfast creators,
and 4 more 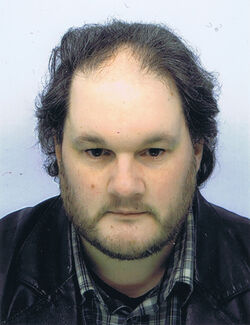 Patrick (Paddy) Brown has been writing and drawing The Cattle Raid of Cooley, an adaptation of the ancient Irish epic Táin Bó Cúailnge, on the web and in print since 2008. Other recent and upcoming work includes a collaboration with writer Gar Shanley in the forthcoming National Tragedy anthology Romantic Mayhem, and lettering for Dublin startup publisher Lightning Strike. He comes from Belfast.

Born in Belfast on 15 October 1969, he failed foundation at the University of Ulster's College of Art and Design. His earliest comics work includes contributions to local anthologies like Wired and NutScrewsWashersNBolts in the early 1990s. In 1994 he began A Virtual Circle, a six-part virtual reality thriller created in an improvisational style - unscripted and drawn directly in ink without pencilling, which was finally completed in 1998. Also created in this style was the romantic fantasy one-shot Under the Bed in 1995. He also created a short detective comic, Tamara Knight in The Liaison Affair (1995), and the satirical leaflet-comic Guilty As Charged (1996).

In 1997 he was invited to contribute to Superstate Funnies, an anthology of European comics published by the Caption small press convention, and created "Communication", a wordless three page vignette about office life. He contributed to Andrew Luke's small press series Bob's, drawing a cover for issue 2 (1997) and a 5-page sequence for issue 6 (2002), and the 2000AD fanzine Zarjaz, writing and drawing a Sláine strip, "Cothraige's Ring", in issue 1 (2001), and drawing a Harmony story, "Steal Softly Through Snow", written by Roger Simian, in issue 2 (2002). He moved onto the web in 1999, publishing Communication and a colour edition of Tamara Knight online.

In the late 1990s and early 2000s he maintained a website collecting stories from the Ulster Cycle, a body of early Irish legends, and made several false starts at adapting the legends of Cú Chulainn, and Táin Bó Cúailnge in particular, to comics, including one intended for the Scottish comics website scomics.com in 2000. In May 2007 he returned to the improvisational approach he had used on A Virtual Circle for his first Ulster Cycle webcomic, Ness, a 72 page story of a princess turning outlaw to track down a murderer, which ran until July 2008. A collected printed edition was launched at the 2008 Dublin City Comic Con.

That set the scene for a larger story, The Cattle Raid of Cooley, adapting Táin Bó Cúailnge. Two generations later, Queen Medb of Connacht stages an invasion of Ulster to steal Ulster's prize stud bull, opposed only by rookie border guard Cú Chulainn, Ness's grandson. It began in August 2008 and updates every Wednesday. Where Ness had been drawn in red ballpoint and converted digitally to black and white, The Cattle Raid of Cooley was published on the web in red. It has so far been collected in six print issues. The latest online installment, page 198 (page 17 of chapter 8), was posted on 24 April 2013.

He has created three 24 hour comics: the stream-of-consciousness dream/ghost story Something at the 2008 Belfast event; a low-key post-apocalyptic story, After the End, at the Dublin event in 2009; and the full-colour children's fantasy Rise at Sundown at the 2010 Belfast event, which he helped to organise with Andrew Luke and Catalyst Arts.

Since November 2009 he and Andrew Luke have run The Black Panel, a regular stall selling small press comics by Irish artists at the Black Market, later the Black Box Bazaar, a local hand-made arts market held at the Black Box on Hill Street, Belfast. The market ran on the first Sunday of every month until late 2011, since when it has reduced in frequency.

In 2012 he drew "What's Roy Thinking?", written by Gar Shanley, for the satirical romance anthology Romantic Mayhem, in the style of Spanish romance artists like Jesús Redondo, Santiago Hernández and Purita Campos, and wrote and drew "Heroes of Bible Days", and Eagle parody, for the forthcoming Courageous Mayhem.

Community content is available under CC-BY-SA unless otherwise noted.