Friers grew up in the Lagan Village area of Belfast. He was apprenticed to the Belfast lithographic firm S. C. Smith and Co, and studied at the Belfast College of Art from 1935 to 1942. He began publishing his cartoons in the 1940s, concentrating on political cartooning with the advent of the "Troubles" in the late 1960s. His work appeared in Punch, the Radio Times, London Opinion, the Daily Express, the Sunday Independent, Dublin Opinion, The Northern Whig, The News Letter, The Irish Times and The Belfast Telegraph.

Aside from cartooning, Friers was a leading figure in the Ulster Watercolour Society, and his oil paintings hang in the National Portrait Gallery, the gallery of the Ulster Museum, and many other collections. He illustrated more than 30 books, including John Pepper's Ulster dialect books and an American edition of the works of W. B. Yeats. He was a keen actor and television performer, with a talent for mimicry, serving as President of the Ulster Association of Drama Festivals and appearing regularly on chat shows. He was awarded the MBE in 1977. He was President of the Royal Ulster Academy of Arts from 1993 to 1997.

His funeral was attended by a large crowd, including politicians from both sides of the sectarian divide - the SDLP's Lord (Gerry) Fitt and the DUP leader, the Reverend Ian Paisley. He was married to Yvonne Henderson and had two sons. 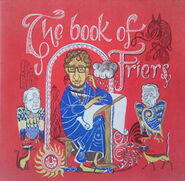 Cartoon from The Irish Times, 1981 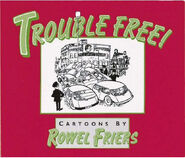