William H. (Billy) Conn was born at 26 Churchill Street, near the bottom of the Antrim Road in north Belfast, on 12 December 1895, the son of William Conn senior, a lithographic artist, and his wife Sarah, née Craig. In the 1901 census the family were living at 45 Eia Street, a little further up the Antrim Road. His sister Mary died later that year, aged only 7, by which time the family had moved along the street to number 42. In 1902 his mother died, aged 32. He was educated at the Ulster Provincial School, now Friends' School, in Lisburn, presumably as a boarder. His father was boarding in the home of Patrick J Murray, a tobacconist, in Bangor in the 1911 census.

In 1921 Conn became a commercial artist at lithographic printing company W. & G. Baird Ltd. From 1936 he was a staff artist for The Belfast Telegraph and its sports sister paper Ireland's Saturday Night, drawing a regular cartoon, "The Doings of Larry O'Hooligan", for the latter. He drew a monthly full-page illustration (two pages in the Christmas edition) for Dublin Opinion, sometimes satirical, sometimes observational scenes of rural and urban Irish life, sometimes ghostly gothic scenes, and also contributed spot cartoons. In 1951 he illustrated a novella, The Whole Story of the X. Y. Z., by Brinsley McNamara. He created colour posters for Northern Ireland Railways, exhibited his black and white drawings and watercolours, and was a member of the Ulster Arts Club and the Royal Ulster Academy.

He died on 25 August 1973, aged 78, after a three year illness. At the time of his death he was living at 7 Stranmillis Gardens, Belfast. He was a lifelong bachelor.

Illustrations and cartoons from Dublin OpinionEdit

"The Eve of his Retirement"

"The Sense of Beauty"

"I see in the papers that we'll never be able to consume all the food we produce."

HARRASSED MILLINER: "What kind of hat WOULD Moddom like?"
CUSTOMER: "Oh, I leave that entirely to you!"

"The Road from the Bog"

"Escape"
Add a photo to this gallery

"On the Way Home with the Turf", watercolour 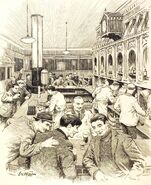 Tourism poster, date unknown
Add a photo to this gallery

Retrieved from "https://irishcomics.fandom.com/wiki/W._H._Conn_(1895-1973)?oldid=27434"
Community content is available under CC-BY-SA unless otherwise noted.