William St. John "Bill" Glenn[1] was born in Belfast on 22 October 1904. Educated at Belfast School of Art, he saw his first illustrations published at the age of 16 in the sports paper Ireland's Saturday Night. In 1925 he created the daily comic strip Oscar for the Belfast Telegraph, which was syndicated to papers in Australia and South Africa, and the following year he joined the paper's staff. Beginning with composing pages, choosing artwork and writing captions, he also contributed columns, under the pseudonym "The Gay Philosopher", and photographs, and became a member of the Institute of Journalists.

He met his future wife Dorothea at a Hallowe'en party in 1926, and soon Oscar had a glamorous wife inspired by her. Dorothea was related to the Brontë sisters, and won the Most Charming Woman of Ulster competition, organised by Pears Soap, in 1929. Glenn married her in 1930.

He drew cartoons and covers for Dublin Opinion from 1928, signing them "W. St. John" with a diamond-shaped "o". From 1931 to 1934 he drew a strip called Simple Simon for Ireland's Saturday Night. In 1938 he created Ballyscunnion, a series of scraperboard cartoons set in a fictional Irish village, often commenting obliquely on world events, which ran in Dublin Opinion until the magazine folded in 1968.

From 1936 to 1939 he drew a daily comic strip for the Daily Mail, named Dorothea after his wife, which was also syndicated to papers in South Africa and Australia. Once the strip was established, Glenn and his family moved to London. Glenn joined the staff of the paper, and also produced cartoons and illustrations for other papers on a freelance basis.

After recovering from surgery on a brain tumour in 1940, he joined the Photographs and Pictures division of the Ministry of Information, editing photographs and newsreel material for release to the media, and producing educational films until the end of the Second World War. In September 1945 he returned to the Daily Mail as features editor, where he started the paper's strip cartoons department. He produced illustrations for The Daily Mail Annual for Boys and Girls, Teddy Tail annuals and the Blue Spot annuals of children's stories. After another brain operation in 1951, he took over drawing the Teddy Tail daily strip until it ended in 1960. He also drew a comic strip based on the Diary of Samuel Pepys, and contributed to The Observer, Punch, Everywoman and Autocar.

He retired from the Daily Mail following another brain operation in 1961, but continued to contribute photos and articles to Chelsea News until at least July 1972. In 1968 he was elected an Honorary Academician of the Royal Ulster Academy, entitling him to use the initials R.U.A. after his name. In 1970 an exhibition of his Ballyscunnion cartoons was held in the Irish Club, Eaton Square, London. He died in hospital in Chelsea in June 1974. 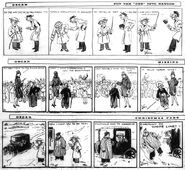 Dorothea
Add a photo to this gallery

Retrieved from "https://irishcomics.fandom.com/wiki/William_St._John_Glenn_(1904-1974)?oldid=27415"
Community content is available under CC-BY-SA unless otherwise noted.